What is The Badass Constitution and who wrote this shit? 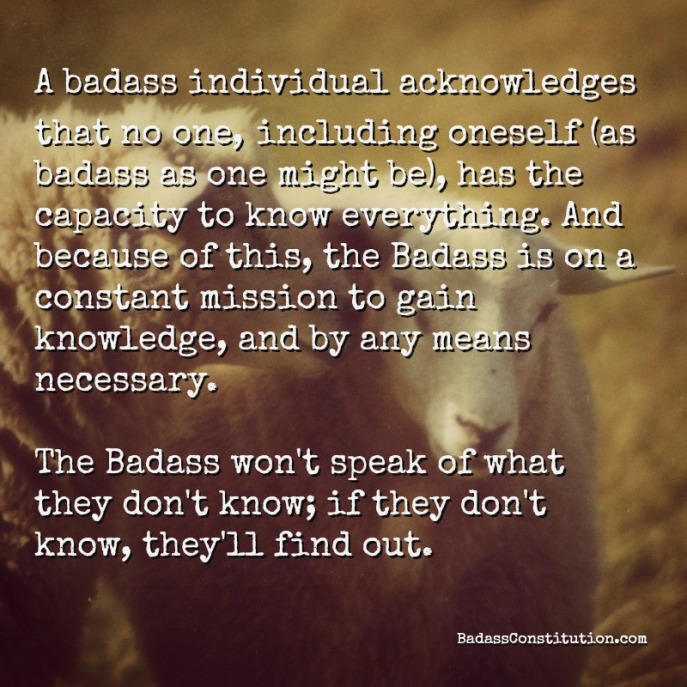 A badass individual acknowledges that no one, including oneself (as Badass as one might be), has the capacity to know everything. And because of this, the Badass is on a constant mission to gain knowledge, and by any means necessary.

There once was a wise, silly old Badass with a bushy-ass mustache, and under the pen name Mark Twain was believed to have said,

“It is better to keep your mouth closed and let people think you are a fool than to open it and remove all doubt.”

In other words, don’t speak of what you don’t know.

Ain’t that some truth to keep you and I out of trouble?

The above quote attributed to Twain, for instance, has been known to have been coined not only by Twain, but Abraham Lincoln, the Bible, and various others. The Badass would not post or share that shit until further investigating just to be sure Mr. Clemens, a.k.a. Mr. Twain, did in fact give this wise-ass piece of advice (so as not to misquote or mislead some motherfuckers). This golden rule would apply to Badass journalists, writers, teachers, and friends as well: Don’t speak of what you don’t know; if you don’t know, find out.

Which leads us to another Badass. Enter the Badass Quote Investigator, Garson O’Toole from Yale and shit.

“Just why is Garson O’Toole deemed a Badass?” you ask.

As made evident by his website, this bastard is unstoppable when it comes to researching the source of quotes. And more importantly, he doesn’t just keep the information for himself and laugh at the blatant stupidity of the rest of our sorry asses–he shares that shit with the world. That’s right–makin’ the world a better, more informed place and shit–one curiosity at a time.

That, Commander, is Badass defined.

He shared that the quote can most likely be attributed to Maurice Switzer, in her book “Mrs. Goose, Her Book” published in 1907 and with slightly different wording (though the same meaning):

“It is better to remain silent at the risk of being thought a fool, than to talk and remove all doubt of it.”

That quote is one for every Badass to hold dear and as doctrine. That quote, with it’s source found, is one that a Badass can share with confidence.