What is The Badass Constitution and who wrote this shit?

A genuine badass individual, in order to promote inner tranquility and freedom for all, may (or may not) choose to follow or practice a religion, philosophy, or a particular belief structure. Upon making an educated effort to ascertain the foundations, origins, and historical facts of said religion, philosophy, or particular belief structure, one becomes secure enough in one’s own badass state of being to allow others the very same freedoms. Like one of those badass peaceful manatees, all cute and cuddly and shit. 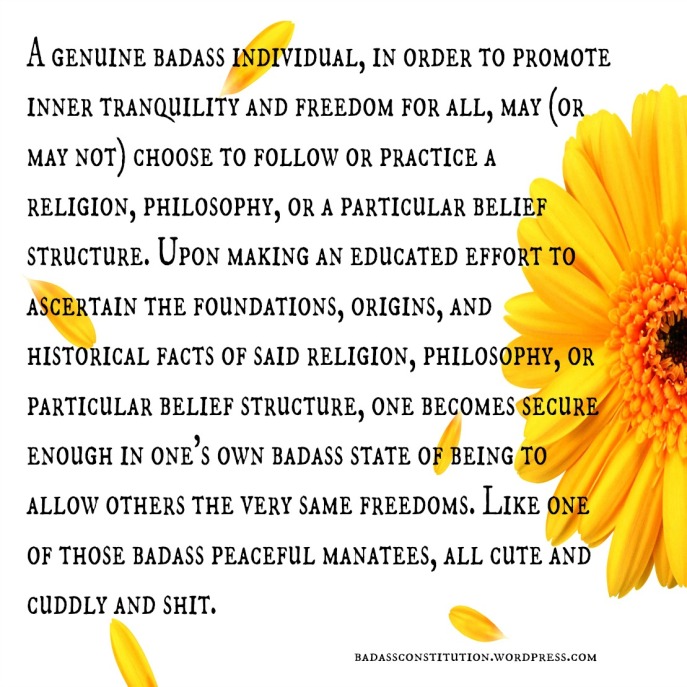 A Badass is secure enough in his/her own beliefs to learn the traditions and rituals of others and not feel threatened by them. Hate comes from fear. That’s right. I said it. Know this Sugar-Cheeks, and don’t forget it: hate (for anything or anyone) comes from fear. Fear comes from the unknown. The unknown to you is your own ignorance. So basically, if you fear someone or something (a person of another culture, a religion, a gay coworker, a straight politician, a juicy-ass Jerusalem cricket, your neighbor’s Doberman Pinscher) it’s because you don’t have an understanding or any familiarity with that someone or something. So, if you hate something or someone due to fear, NEWS FLASH: your ass is ignorant. BOOM. Don’t you argue with me, honeychile. Just sit your ass down and meditate on that sweet-ass shit for a while.

I’ll tell you what the problem is . . . it falls within our own goddamned domestication. We weren’t often taught as children at home or in school to venture outside of our own comfort zone and get to know others. We stay away from the people, we preach our own beliefs, we kill the bugs (and sometimes the animals and people). We are taught only to compete with others, feel sorry for others, or stay away from others. Violence is given more tolerance than tolerance itself.

Let’s go down the rabbit hole a bit and dare ask . . . who the hell benefits from fear? You? Me? Certainly not the Badass individual. But like good little puppets, fearful individuals do buy a lot of motherfuckin’ shit . . . .